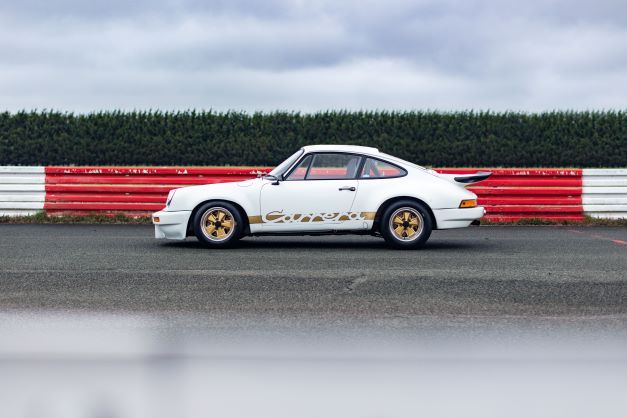 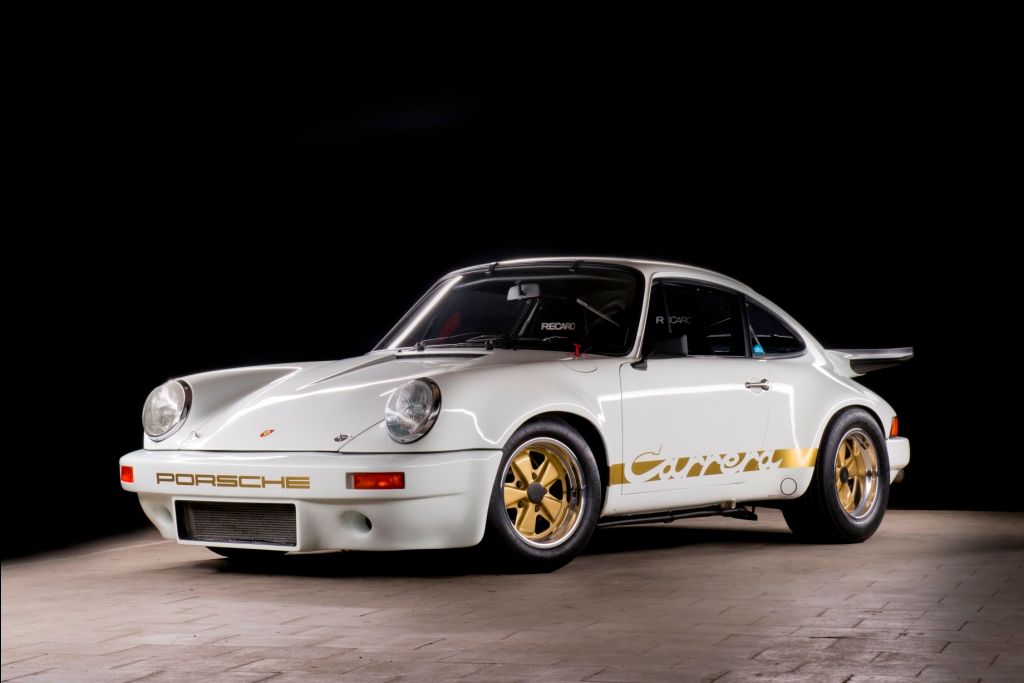 In 1974 the first drastic model change in the history of the 911 occurred.  The all important American market issued the 5 mph bumper impact measure.  In order to comply with this the bodywork of the 911 changed into the well know impact bumper series G.

The first race cars to receive the new look were the IROC cars.  The first photo’s of the IROC (international race of champions series invented by R. Penske) showed the impact bumper model although still with the 1973 ducktail.

The 3.0 liter IROC racers were therefore the first of a new breed.  The 15 cars that Porsche build for the series used the standard 1974 Carrera coupé chassis numbers rather than  a distinct batch of different serial numbers.

Porsche wanted to stay within the evolution of the earlier RS/RSR series (FIA homologation 3053).  To stay within these evolution boundaries Porsche had to build a series of 100 cars. By making the 15 IROC’s within the chassis number series of the Carrera they were hoping to achieve this target, especially if one takes into account that sales were slow due to the 1973 oil crisis.

Moreover as the normal price fork for the 911 was between 29.250 DM and 41.950 DM the RS 3.0 priced at 64.980 DM was very expensive. No-one can blame the Porsche sales department from being afraid that at this price and in an economic recession sales would be very slim for this type of car.

Porsche made  in total 109 of these cars in both RS (road trim) and RSR (race trim).  At the end of the production 55 cars were build as road RS’s.

The body of the Carrera RS 3.0 was similar to that of the IROC racers, with the welded on wheel arch extensions (of very typical RS 3.0 shape), bumpers (G series impact bumper) front lid and engine cover with a horizontal spoiler.  The front spoiler was  different from the series cars as it had the opening for the oil cooler and the dual openings for brake cooling ducks on each side.

Of particular interest is the fact that the cars were delivered with two types of whale tail spoilers.  The smaller one with the rubber protection for road use.  This spoiler was deemed to be pedestrian friendly (as opposed to the in Germany street illegal ducktail) and therefore had to stay within the total length of the car.  For race use there was the bigger spoiler with an additional cooling vent (this type of spoiler as used on the IROC’s and on the racing RS’s being the RSR’s).

Light gauge metal was used wherever possible to keep weight down, and soundproofing was minimal for the same reason.  Thinner glass was specified for the side and rear windows (the rear side quarter windows were fixed), with chrome work finished in black, and body-colored headlamp rims.

The five-speed transmission was carried over from the 2.7 road cars, with a limited-slip differential as part of the package.  The suspension was similar to that of the late 1973 RSR models, with a few detail changes, and the brakes were straight off the 1973 RSR.  It was homologated with 8J and 9 J by 15 Fuchs wheels.

The stripped interior was much like that of the previous RSR, with the Recaro bucket seats a new, three-spoke steering wheel from the 1974 road car (albeit thicker).

The 80 liter fuel tank came straight from the production cars, but it was necessary to fill it with Four Star petrol for this machine. Weight was listed at 900 kg, although it is unlikely that many cars were this light, especially in road-going trim.[1]

The top speed of the car was a little higher than its predecessor, mainly due to the fact that the wider body was not so aerodynamically efficient.  The 0 to 100 km/h acceleration was almost a second better that the 2.7 RS.

This particular Porsche was sold by Amag (Swiss Porsche importer at the time) to its first owner Georges Bosshard.

John Starkey who wrote the book “Porsche: From R to GT3 RSR” had the car’s racing history researched and it reveals that it was entered in mainly German DRM racing between 1974 and 1978.  But recent evidence shows that the car may have participated or was entered in the 24 hour of Le Mans race back in 1975.  If indeed it is this car then this “Lois” sponsored Porsche finished the race in 10 position overall and first in class.

The history after its 1978 history of this car has still to be unveiled, but evidence up to now shows that the car only had two or maximum tree other keepers.  The actual owner, a Swiss banker had the car enlisted for Le Mans Classic in 2012 (maybe also once before)  and did at least two maybe tree “Tour de France” rallies with it.  The last one in April of 2012.

The inspection of the car, that we had performed, reveals that it is all original.  The underside of the car is still in original paint.  The outside of the car has been re-sprayed in the original Grand Prix white. The interior is mostly original and the seats have been replaced with Recaro FIA approved racing seats.  The car also has a complete roll cage.  As the previous owner ran the car in the Tour de France and was supposed to run in the Le Mans Classic the car need a FIA HTP pass which it does have.

It also seems that the car has the entry ticket to Le Mans Classic for 2012.

In résumé one can say that this is a most original Carrera RS 3.0, one of the 55 examples build back in 1974 (as an evolution model on the legendary Carrera RS 2.7 duck tail).   The car definitely does have some serious racing in its day, mostly within the German DRM championship and it has most probably some Le Mans history.

More importantly so is that this car has all its original bodywork and specific RS 3.0 tweaks.

It is a rare find and a car that has to be kept as is, for further generations to enjoy either in ownership or just as a period object. 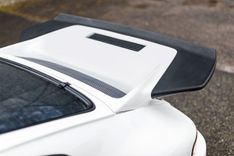 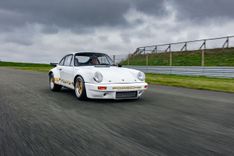