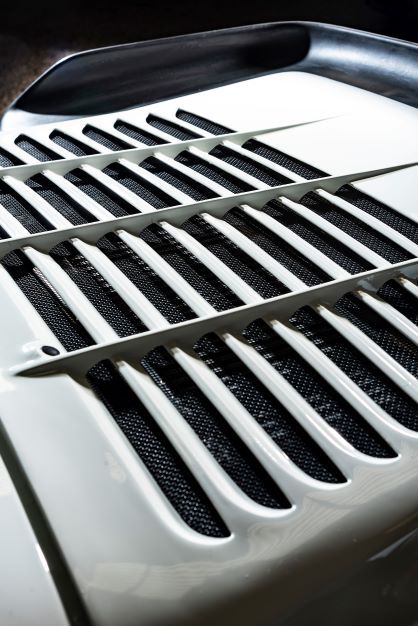 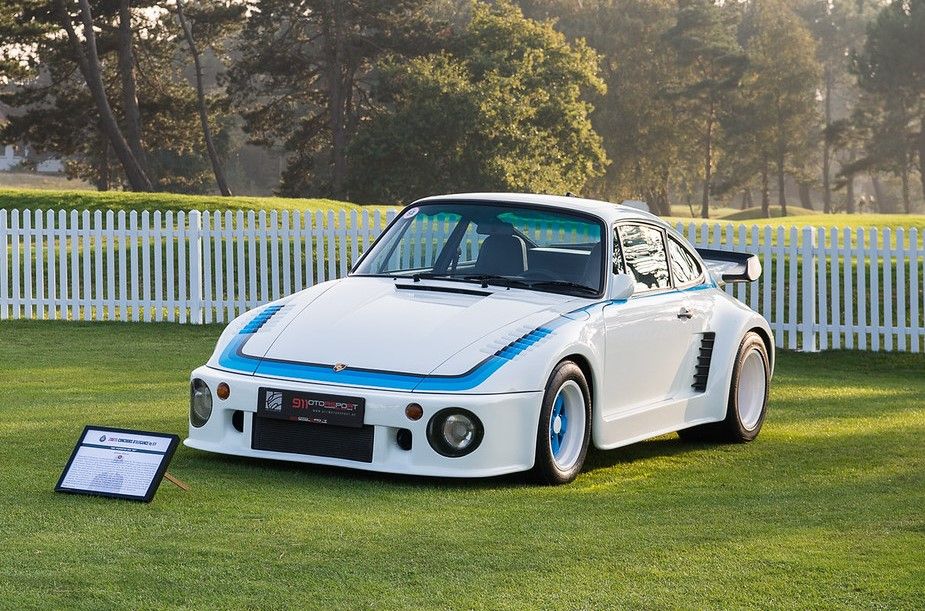 The first owner of the car must have been a race lover as he drove his car over to DP in Overath to have it transformed into a 935 DP.  Ekkerhard Zimmerman a well know aerodaynmicus was responsible for the different shapes of the race winning Kremer 935’s. Kremer went on to win eventually the 24 H race of Le Mans in 1979 with Ludwig and the Whittington brothers. After the K3 an ultimate development was the K4 that Kremer enlisted in Europe in the Jägermeister colors.  There after the Kremer K1 to K4 were mainly used in the USA, with great success all the way into the end of the eighties. These K cars were dominant in the Camel Imsa GT series.

So he was about the first person who came with the idea of making a 935 look out of a Porsche 911. Whenever you had a 911 you could go over to DP and they would gladly build you a 935.

The interesting part came when you not only had a 935 body look but also the power to go with it. So although you were able to have your SC transformed into a 935 little was the interest except for looks.

DP also developed the body kits for Cabriolets and Targa’s.  Now back in the eighties exaggeration was the word of the day, so most probably quite some people who wanted to show off and had the money went over to have their 911’s transformed into the 935 DP.

Apart from transforming the body’s of Carbriolets and Targa’s Ekkerhard Zimmerman developed his body kit all the way up to the K3 look with the curved lamps in the front spoiler.  One of the latest explorations was changing the front hood so that it came a little higher and all the way up to the windscreen.  He then put on a single blade wiper as to accentuate the race heritage.

As said this particular white car was build into a 935 DP right after it came from the factory. The front wings are polyester, as is the front spoiler, the rear wheel arches, the side boards and the rear bumper. Appealing to this car is the shape of the front spoiler with its twin headlights, just as in the first generation of the 935 (1977).  The rear wheel arches are wider than those of a 930 Turbo and have the cooling ducts on the front side.  One of the particularities of this car is that back in the day there were only two cars with 345 tires on the back.  This 935 DP and the Lamborghini Countach.  Even today no car, to our knowledge does have these wide tires.  No Fuchs wheels existed at the time to mount these wide tires.

Therefore Ekkerhard Zimmerman had them cut in the middle of the rim and had a part welded into the middle so as to widen them up to the necessary with.

Same thing happened with the front rims.  Therefore the look of the car is pretty aggressive as the Fuchs star is very inwards.

The car was painted white with the typical Kremer 935 striping (here in 3 contrasting shades of blue).  The same shape of stripes can be found on the LM winning 935 K3.

The wheels were finished in the same shade of white with the inner stars being painted blue (as to match the color stripes).  The engine of this particular car underwent a tuning so as to turn out about 420 bhp. This tuning is very similar as to what Kremer did at the time.  They changed the camshafts (making them sharper), they put on a bigger Turbo and changed the outlet of the waste gate, as well as putting on a bigger air to air cooler for the compressed air.  Driving the car makes this immediately clear as there is almost nothing below 3.000 rpm. Under this rpm you only have the power of the non blown engine.  But once you hit the 3.000 rpm’s the Turbo is spooled up and starts to deliver the power through the volume of compressed air going into the plenum.  Then the power really hits you and pushes you back in your seat.

The car is equipped with an electrical sunroof and a Turbo S (Sonderwunsch-program) steering wheel. The dials apart from the adding of an analog Turbo boost meter instead of the clock are stock.  The rest of the interior is typically stock for the eighties. 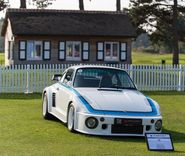 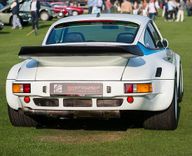 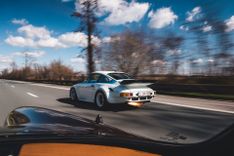