The RSR was that rarity – a legend in its own lifetime. Many cars are granted ‘classic’ status based purely on old age; others because they happen to have the right badge on the nose.  The RSR earned its reputation the hard way – on the race circuits of the world.

The work of H. Bott and N. Singer, the RSR was developed alongside the RS, so a prototype was available for FIA inspection at the end of 1972.  The M 491 modification included a new engine, up rated brakes and suspension and even more basic interior than of the M 471 (incorporating a half-roll cage), and a number of bodywork revisions, mainly to improve cooling and allow the owner to take advantage of the wider wheel and tire combinations available.

The transmission was carried over from the RS, although being a racing car a number of gear sets and final drive ratios were listed to suit the various tracks.

The drilled and ventilated brakes were taken from the awesome 917’s.

Wide wheels 9J X 15 and 11 J X 15 were sourced from Fuchs. Therefore the wheel arches had to be massively widened to accommodate these wheels.  This is clearly the most noticeable difference with the 2.7 RS. The front spoiler did have an opening in the middle for the oil cooler.  On high speed tracks (like on Daytona) a lip was mounted under the spoiler so lift of the front axle was lessened.

The front lid was held down with two rubber straps and the cars did have a 110 liter fuel tank.  The interior was even further stripped down and a 10.000 rpm tacho was installed, as well as a Heinzman fire extinguisher.

The standard RS had a 2.7 liter engine and therefore it was possible to homologate it up to the three-liter maximum.  The “customer” racing cars did have a 2.8, but the factory took some experimental engines up to a 2.993 cc capacity with a bhp output of 315 (911/74).  Later in the season the factory developed even more powerful engines (330 bhp, type 911/75) for their official Martini sponsored cars[1].

Amazingly enough the first race the car was enlisted in, the Daytona 24 hours, it won outright.  As it was not yet homologated in Group 4, it had to run in the prototype category Group 5.  It was the Brumos entered car for Gregg and Haywood that took the chequered flag in first position. Another Brumos entry two weeks later led to the overall victory in the 12 h of Sebring with again Peter Gregg, Hurely Haywood and Dr. Dave Helmick.

After Daytona, it were the Martini sponsored “works” cars that won in Dijon, and the grueling Targa Florio.  In the Le Mans testing the 3.0 liter RSR clocked fastest time only to finish 4 th in the following 24 hour race.  In Le Mans the “Mary Stuart” tail was on the car, as well as even larger wheel arches.  These aerodynamic features were carried over on the Nürburgring where Van Lennep and Müller finished fifth.  Towards the end of the season the factory was experimenting with the long tail configuration as it ran in Zeltweg and Watkins Glenn (although now in Brumos and Sunoco livery).

This particular RSR was bought new by Mexican Juan-Carlos Bolanos, who raced it for the first time on the 1.000 km of the Nürburgring. In one of the pictures the car is coming out of the Carousell just in front of the Martini sponsored 3.0 RSR of Van Lennep and Müller.  The car did not finish the race and was send back to the factory.

The picture above shows the car in the paddock area before the 1.000 km of the Nürburgring.  Below is the J.C. Bolanos car in front of the Martini RSR of Van Lennep and Müller exiting the carrousel.

Later on it arrived in Mexico to be entered in a numerous local events, as well as some international ones, mainly the 24 hours of Daytona.  It is not clear at what point Mr. Bolanos did sell the car but it is obvious though that it was sold to South America.  It is very likely that Mauricio De Narvaez did buy the car and campaigned it until the eighties.  The car was regularly updated, up to the point where it was a real 935 (tubular chassis car) with the 935 engine hanging in the back.

In 1992 the car was sold by Conrad Casado, who had sourced it in South America to Jim Torres of Burbank California.  Jim Torres did start the restoration of the car, tearing apart all those non original 935 evolutions.  It took him quite some time to restore, and rebuild the car to its actual status.  It was then brokered by David Mohlman for a client in the far east, who never took the car with him.  It stayed in the US, until Mohlman resold it to the present owner, on October 19 th 2004.

The amazing story of reuniting of the original engine with the chassis (October 30 th 2007).

After some 34 odd years the previous owner of the car did mail me, saying that the original engine of the car did probably resurface in Southern Florida.

Because I was going to the 3 rd Rennsport Reunion (Oct 25 th till Nov 5 th 2007) I decided together with Kobus (the guy who did the inspection of the car in the first place) to visit Bruce A. Ellesworth (managing partner of Klubsport in Riviera Beach Florida).

It was in fact Bruce who did have the engine for sale.  He did get a hold of it, years ago when a client of his did ask him to build him a 935 engine.  As a down payment Bruce did get the engine # 6930152 of the production type (911/72). He didn’t realise at first that this magnesium engine casing was in fact a bases for the 911 Carrera 2.7 RSR.

Over time, Bruce did search for all the missing bits and pieces, so that one day he could rebuild a correct spec RSR engine.  The original valve castings are still with the engine, as well as the rockers. Everything else, such as pistons, cylinders, etc… were NOS and build together.

Today only the fuel pump is not original (it is an updated 2.7 RS pump), as well as some of the polyester engine surroundings (most being original though).

Therefore one can conclude that fairy tales are still of this world !!!

So I suppose that this car must be one of the very rare ones left that is matching numbers (where the 6930152 engine is put aside) and the does have a correct spec engine to power the car.

The picture above and below shows the car with its 1.000 km of the Nürburgring decoration. 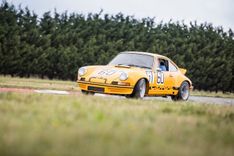 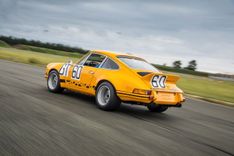 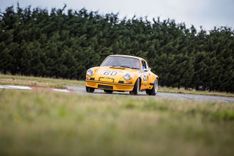 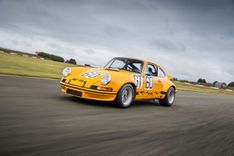 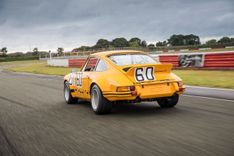